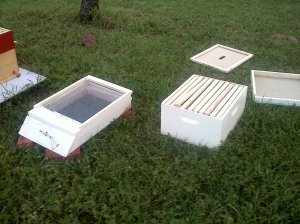 All setup to add the new hive parts.

I got the new hive parts from Dadant yesterday.  I managed to get them completely assembled and painted yesterday night.  It took about two and a half hours all told, but it was worth it because of what I was able to do today.

Today, I put the new parts onto the larger of the two swarm hives I caught this year.  All told, it was a bit more work that I thought it would be.  As I had feared, the bees built comb onto the bottom of the super frames when they finished filling out the supers entirely.

A bad picture of the extra comb the bees built. It is a bit hard to take pictures and work the hive when daylight is fading fast.

I removed all of the extra comb from the bottom of the frames and did my best to encourage the bees to move into the new deep hive body.  There was a little honey, pollen and capped brood in the comb I removed.  All told, it took up almost a 5 gallon bucket without compressing anything down.

I don’t like working with bees after dark as they have a tendency to crawl up my legs and sting me.  This hive also stung me on the legs when I captured it. and it happened to be dark then as well.  This time, two managed to sting me through my socks.