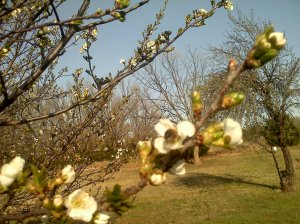 A honey bee on a cherry blossom. When I took this picture, the whole tree was buzzing with insects.

The last chance of frost is quickly approaching.  Already, one late frost hit the peach tree pretty hard and almost all of the blossoms died before starting to set fruit.  Compared to last year, only about one in ten or twenty flowers is setting fruit.  I hope the tree will compensate by making larger fruit, but even if it doesn’t, I’ll be happy with whatever fruit I do get.  I still have several jars of canned peaches in the pantry to use.  The cherry trees and the apple tree missed that freeze and are in the process of blooming, and hopefully the soft freeze forecasted for next week does not affect fruit set.  At least this year, I know which tree is which.  Last year, I mistakenly though the cherry tree was actually an apple.

One of the first five peas that have sprouted.

About a week and a half ago, I started direct planting peas and beans in the garden. So far, the results have been rather mixed.  I have had five pea plants sprout and several of the beans also sprouted.  However, the beans don’t seem to be surviving the cold night temperatures, so it is just as well that the majority of the beans to sprout yet.  I have plans to plant the beans close enough that they basically form a blanket over the garden bed.

The grape vine is starting to put on leaves.

The grape vines are just starting to put leaves on.  Last year, the grape vines had this happen almost a month earlier.  In general, this growing season seems to be taking its time to get going.  Not that I mind too much.  I just am anxious to start seeing the results of my work.  Last year, was not able to do very much with the grapes I harvested, and almost all of them went into the freezer. Because they are seeded grapes, they are not really useful for eating straight, so grape juice and wine are really the only uses for them and only the grape juice is really an option for me because I refuse to drink alcohol of any form.  The only way I could get juice out was to cook the grapes and then strain them thru cloth.  The resulting juice had oxidized and was not very good.

The steam juicer I used to make fruit juice. This is the same style of juicer that my wife’s grandmother used.

About a week ago, I got a steam juicer in and was able to easily turn the grapes into very good tasting grape juice, along with the peach peals and apple peelings and cores.  The juices will probably need to be mixed to get a good final product, particularly with the peach as it is quite tart, but overall, they taste quite good.  The grapes in particular were quite good because the juicer keeps the grapes from oxidizing and giving the juice an off taste.

Frost on the leaves of the bean plants.

Last night, we had the first frost of the year. I’m not too surprised, because the weather forecast had us under a frost advisory and the previous night got down to 41°F.  I’ll just have to wait to see if anything dies because of the frost.  I’m not  worried because it should be up in the fifty’s today and not get quite as cold tonight. 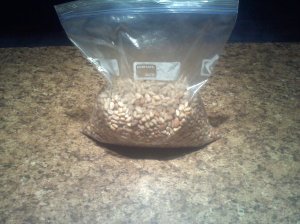 All the pinto beans I’ve grown this year. Not too bad for my first time gardening.

The bean harvest started and I did not report it.  So far, I’ve harvested about a pound and a half of pinto beans and there is still lots of bean pots on the plants that.  I should have a nice batch ready for picking when I get back from a business trip this week.

From everything I’ve read, it is about time for me to plant fall garlic.  The signs I’ve read about for the right time to plant is after the first frost and when the soil temperature at four inches is 50°F, both of which happened last night.  I need to look over the planting material once more before I put the garlic in the ground and hope for the best.  Worst case, I just end up planting spring garlic.